Research in the Rohani lab focuses on population biology, usually of host-natural enemy interactions, with a view to understanding fundamental processes in ecology and evolution. We use a combination of mathematical modelling, data analysis and statistical inference to understand the ecology and evolution of infectious diseases of humans and wildlife, including childhood infections and emerging infectious diseases. 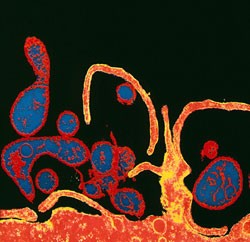 Much of current research in the lab is based on understanding long-term data sets on the spatio-temporal patterns of morbidity and mortality caused by microparasitic infections of childhood (such as measles, whooping cough and polio) and in wildlife systems (avian influenza viruses). The analyses of these data have provided interesting insights into the mechanisms of transmission and the ecology of infectious diseases.

Ecology, Immunology and Evolution of Pertussis

The study of pertussis is a major focus in the lab, funded by a collaborative 5-year grant with Dr Aaron King (University of Michigan) from the National Institutes of Health.  Our work on this project has involved a multitude of approaches:

We have been documenting the diversity of patterns in pertussis incidence using data from a number of sources.  We have demonstrated how clear waves of pertussis incidence in the US during the 1950s gave way to spatially unorganized and irregular epidemics in the 2000s (Choisy & Rohani 2012).  In contrast, we find no evidence for geographical pulsing in pre-vaccination era pertussis epidemics in England & Wales (Conlan et al., in prep), contemporary reports from the provinces of Thailand (Blackwood et al. 2013) or regions of Italy (Magpantay et al., 2016).

More recently, we have examined spatial synchrony in pertussis epidemics in the boroughs of London, identifying multi-focal recurrent waves (Saeidpour et al. in prep).  To understand the potential drivers of these waves, we have used feed forward neural networks to identify potential borough-specific predictors of epidemic phase.

Nature and duration of immunity

A key issue in the epidemiology of pertussis remains the duration of immunity, both derived following vaccination and natural infection. Using probe-matching approaches, Wearing & Rohani (2009), explored when model dynamics are in parsimony withepidemiological data. The main conclusion of this study was that mean duration of natural immunity may be in excess of 30 years.  Last year, in the paper by Blackwood et al. (2013), we competed a range of models to explain contemporary pertussis incidence data from Thailand; we found long-term duration of immunity provided the most parsimonious explanation for the data.  Recently, we have developed theory on the epidemiological consequences of different mechanisms behind immune “failure”, specifically the distinction between leaky and all-or-nothing immunity (Magpantay et al. 2014).  Currently, we are in the process of evaluating the empirical evidence in support for these alternative explanations using computational statistics approaches on incidence data from England & Wales (Domenech de Celles et al., 2018) and Italy (Magpantay et al., 2015).

Despite much uncertainty over the mechanisms that have shaped the resurgence of pertussis in countries such as the US and the UK, public health policy makers have had to implement responsive control strategies, in the shape of boosters introduced into the existing schedule.  Given the complexity and high dimensionality of the problem, it isn’t well-suited to traditional optimization methods.  So, we have been using a genetic algorithm approach to identify effective booster strategies under different assumed underlying causes of resurgence (Riolo & Rohani 2015).

Pertussis immunization and diagnostics in a low-middle income setting

In collaboration with colleagues at Boston University, we have examined the adherence to routine immunization schedules (Gunning et al. 2020) and have established the usefulness of the full range of qPCR CT values in informing pertussis epidemiology (Gill et al. 2021).  Additionally, this study has identified a high incidence of asymptomatic pertussis, notably among infants.

In Shrestha et al. (2011), we examined the plausibility of using likelihood-based inference to detect interaction among pathogens and the limits to this approach.  Since then, we have obtained funding from NIH as part of the MIDAS network to make this analysis more formal.  This project is in collaboration with Derek Cummings, Bobby Reiner and Aaron King.  In a related effort, we will also be exploring the impact of climatic drivers on dengue transmission, with Diego Ruiz Moreno.

For more than a decade, we have been interested in studying ecological interactions between infectious diseases, which may arise from unavailability to contract a disease following infection with another or via immunological mechanisms (Rohani et al. 2003; 2008).  Theoretical analyses of such mechanisms predict pronounced phase-differences between different disease (or strains of the same disease), which are consistent with observed patterns in mortality data.  Statistical methods for the detection of such interactions, especially in antigenically polymorphic infectious diseases such as dengue (Wearing & Rohani 2006) are very timely, and a main focus of research in the lab.

Interaction between influenza and pneumococcal bacteria

Numerous studies focused at the level of the individual—including lab challenge studies on mice and autopsy reports on humans—have established that infection with the influenza virus affects the outcome of exposure to bacteria.  In contrast, efforts to uncover a clear signal of this phenomenon in population-level incidence reports have been unequivocal.  We have developed a likelihood-based hypothesis-testing approach using a mechanistic pneumococcal transmission model and identified a clear, unambiguous interaction, resulting from a short-lived but notable increase in susceptibility to bacterial pneumonia following influenza infection (Shrestha et al. 2013).  Ongoing work will extend this to all-cause pneumonia (Shrestha et al. 2015).

Over the past ten or so years, we have been working with David Stallknecht and John Drake (both at the University of Georgia) and Benjamin Roche (Montpellier) to understand the transmission dynamics of Influenza A viruses among their avian hosts.  In particular, this work has focused on the consequences of environmental transmission via long-lived viral reservoir.

We have shown that indirect transmission chains can have important consequences for the invasion (Rohani et al. 2009), persistence (Breban et al. 2009) and coexistence of these viruses (Breban et al. 2010; Roche & Rohani 2010).  In Delaware Bay, described as a global hotspot for avian influenza viruses, environmental transmission is shown to be a crucial component in the triple prevalence peaks reported during the year (Brown & Rohani 2012, Brown et al. 2013).

In collaboration with Benjamin Roche and John Drake, we have studied the impact of mixed transmission dynamics on the evolution of virulence, documenting the necessary conditions for evolutionary bistability (Roche et al. 2011).

The study by Roche et al. (2014) documented contrasting patterns of viral genetic diversity among human and avian influenza viruses.  Within comparable subtypes, we observe an order of magnitude greater HA diversity among avian viruses.  We examined putative explanations and found that HA genetic diversity in avian viruses is determined by a combination of factors, predominantly subtype-specific differences in host immune selective pressure and the ecology of transmission (in particular, the durability of subtypes in aquatic environments).  Our conclusion that environmental transmission plays an important role in the evolutionary biology of avian influenza viruses—a manifestation of the ecological phenomenon called the ‘‘storage effect’’—highlights the potentially unpredictable impact of wildlife reservoirs.

In collaboration with John Drake (UGA), Andrew Park (UGA), Matt Ferrari (Penn St) and Bogdan Epureanu (Michigan), we received an NIH MIDAS grant to forecast tipping points in infectious disease systems — we have called this project AERO (Anticipating Emerging/Re-emerging Outbreaks). Our study will develop new theoretical models to study the transmission of infectious diseases near tipping points. We will then develop algorithms and software for detection of epidemiological patterns indicating the approach to emergence. In the Rohani lab, this work is spearheaded by Toby Brett, who is exploring critical slowing down in finite populations.

In April 2021, we were award an NIH Center of Excellence in Influenza Research and Response.  Our Center for Influenza Disease & Emergence Research (CIDER) is comprised of colleagues from UGA (College of Veterinary Medicine, Odum School of Ecology, School of Public Health, Institute of Bioinformatics) as well as outside collaborators (St Jude Children’s Hospital, Rochester University, Boston Children’s Hospital and the University of Melbourne).  CIDER will conduct research in three continents.  The Rohani lab will contribute to the informatics mission of CIDER, starting with a research project on the within-host dynamics of influenza B viruses in ferrets and mice.

In collaboration with Justin Bahl, John Drake and others, we are working on a CDC-funded project to predict influenza antigenic evolution. This work involves a combination of statistical learning approaches applied to HA sequences, viral physiochemical traits and indicators of immune response, including HI titres.